Praise for Pope and Mussolini

"The Pope and Mussolini is a riveting story from start to finish, full of startling, documented detail, and nobody is better prepared than David Kertzer to tell it."

--Jack Miles, Winner of the Pulitzer Prize and author of God, A Biography

"A capstone on David Kertzer’s already crucial work, The Pope and Mussolini carefully and eloquently advances the painful but necessary truth of Vatican failure to meet its greatest moral test. This is history for the sake of justice.”

—James Carroll, Winner of the National Book Award and author of Constantine’s Sword

“The Pope and Mussolini tells the story of two remarkable men, Achille Ratti, Pope Pius XI, and Benito Mussolini, Duce of Fascism. Both demanded absolute obedience. Those who knew the Pope called him ‘a block of granite’ and ‘cold as marble’ The highest prelates trembled in his presence. Mussolini, swollen with his success, became ‘a statue’ who listened to no one. David Kertzer tells their stories in counterpoint as it could never have been told before. The opening of the Vatican archives in 2006 and the discovery of a vast archive of Mussolini’s spies in the hierarchy of the Vatican provide him staggering new evidence, and his wonderful portraits of everybody involved gives this book the fascination of a great novel.”

“David Kertzer who pored through the recently opened Vatican Secret Files gives us a ghastly history of the poisonous alliance between a weakened Vatican and an ambitious Mussolini. The Pope’s blessing gave Il Duce the needed credibility to take Italy and the Italian people where he wanted them to go; in exchange for that approval, the Fascists provided the church with its only perceived bulwark against the forces of Communism and the modern age. Enter Hitler. I can imagine Machiavelli over-seeing the manipulations on both sides and saying either ‘Well played’ or ‘You go too far’ or ‘Beware’. David Kertzer has written a harrowing portrait of a ghastly union whose only by-product was the nightmare of World War II.”

“A book that wholly deserves, even demands, the adjectives ‘groundbreaking,’ ‘courageous’ and ‘captivating,’ David Kertzer’s The Pope and Mussolini, based in large part on 25,000 newly-discovered documents, sustains a thesis that decisively challenges the received narrative about Pius XI and the Fascist leader. In fact, as Kertzer proves, the Vatican, collaborating intimately with the blackshirt government, played an indispensable role not only in bringing to and maintaining the Fascist regime in power; it also relied on the state’s repressive law enforcement apparatus to achieve its own totalistic agenda. The relationship, in short, was one not of hostility but of mutual dependence. More than that, far from protesting the racial laws, the Vatican supplied Mussolini with some of his most powerful (and repellent) arguments for promulgating them. Among those who suppressed criticism of the racial laws and kept relations between pope, dictator, and Hitler running smoothly was Vatican Secretary of State, Eugenio Pacelli, who succeeded the pope as Pius XII. This was an alliance between church and state that one can only describe as unholy. These conclusions, which one still finds unsettling and even shocking, are unflinchingly and conclusively proven, thanks to Kertzer’s profound and thorough research, scholarly authority and narrative panache. A meticulously researched and crafted book, exquisitely written, fresh, mesmerizing and enlightening.”

“Most of the writing about the papacy of Pius XI focuses on his dealings with Nazism and the Third Reich, a history studded with some bold condemnations of Hitler’s ideology, especially its racism, and his policies toward the Catholic Church after 1933. Kertzer shifts the perspective to Pius’ tempestuous association with Mussolini, a less studied subject but one that will pose difficulties for those who still wish to see Pius XI as a hero. The story of the interaction of these two powerful personalities has been told, at least in its broad outlines. However, Kertzer, with clarity and meticulous attention to detail, goes beyond personality, putting that relationship into the context of papal politics and the fascist state and grounding the narrative in a huge body of archival evidence. He corrects and greatly amplifies the record, provides documentary proof for what has been only speculation up to this moment, and tells a thoroughly engrossing story. Like a loveless marriage, entered into for all the wrong reasons, Pius and Mussolini could not get free of one another. Mussolini hated priests. Pius XI again and again swallowed his scruples about the Duce’s growing megalomania. Each reckoned that he had much to gain from the other. Mussolini restored the influence of the Church in education, made Italy a Catholic state, and provided a bulwark against atheistic communism. The pope’s endorsement of many fascist measures, his lauding of it leader as a “man of Providence,” and his indispensable support for Italy’s grandiose foreign policy were benefits Mussolini could obtain in no other way. Each backed off from the ultimate confrontation they seemed always to be heading toward. The marriage may have endured until the end, but it brought out the worst in both of them. Guiding the reader through one complicated situation after another, with an ever-changing cast of fascinating characters, Kertzer never loses sight of a basic truth. Beneath their endless squabbling about precedence, their continual posturing, Pius and Mussolini undermined and ultimately squandered the happiness of the millions who trusted them. Kertzer has written the definitive book on this tragic history.”

—Richard S. Levy, Professor of History, the University of Illinois at Chicago, editor of Antisemitism: A History 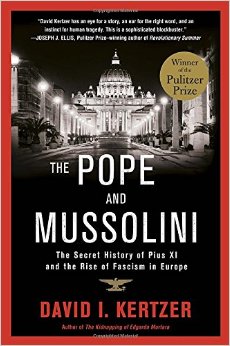