Praise for The Pope Who Would Be King

"The modern world was forged in a series of revolutions stretching from Philadelphia in 1776 to Paris in 1789 to the cascading cataclysms in Europe in 1848. In this original—and even thrilling—book, David Kertzer gives us a brilliant and surprising portrait of the role of Pius IX in the making of a new democratic reality in the West. Engaging, intelligent, and revealing, The Pope Who Would Be King is essential reading for those seeking to understand the perennial human forces that shape both power and faith."
—Jon Meacham, author of Thomas Jefferson: The Art of Power

"Kertzer provides an exceptionally deep archival and scholarly foundation and has a rare capacity to tell the sotry of a critical chapter in European history with novelistic verve. He brilliantly linsk the history of Italian characters to epochal changes in modern European history, including the changing fortunes of the papacy and its rule over the Papal States, of the time-honored tradition of divine right, and of the separation of church and state."
—Kevin Madigan, author of Medieval Christianity

"In this riveting tour de force, David Kertzer shows how and why Pope Pius IX turned Roman Catholicism into the nemesis of modernity, with drastic consequences not only for the church but for the West—consequences felt to this day, when religion and politics form a lethal brew. Elegant writing, the pace of a novel, scrupulous scholarship—these hallmarks of Kertzer's body of work are all ine vidence here, wonderfully so."
—James Carroll, author of The Cloister

"The Pope Who Would Be King is a remarkable achievement—both a page-turn and a major contribution to scholarship accomplished with outstanding clarity and economy. Kertzer gives this story a notable degree of freshness and brings out vividly the determination, passions, blood, and gore of this dramatic moment in European history."
—John Davis, editor, Journal of Modern Italian Studies

"This lively, sympathetic yet critical account of the early years of the pontificate of Pope Pius IX is worth of its distinguished author."
—Rev. John W. O'Malley, S.J., author of The Jesuits

"Exhilarating and hypnotic, The Pope Who Would Be King shines the spotlight on a time when today's world struggled for birth as the church fought tooth and nail for every last shred of power and relevancy."
—John Guare, playwright, Six Degrees of Separation

"Kertzer, who won the Pulitzer Prize for his biography of Pope Pius XI (The Pope and Mussolini), expertly captures the tension of a deeply devout population, loyal to their church but receptive to the stirrings of both liberalism and nationalism. When Giovanni Mastai Meretti was unexpectedly elected pope in 1846, throngs of adoring Romans heralded his rise, convinced that the humble and fair-minded archbishop of Spoleto would loosen the screws of theocracy in the Papal States and usher in a golden era for Italy. The first months of Pius IX's rule seemed to bear out this vision, but before long political upheaval forced him to flee--and after his return, chastened and mistrustful of democracy, "[t]he pope's embrace of a medieval vision of society could not have been clearer." At the end of his papacy, Pius IX presided over "the death throes of the popes' thousand-year kingdom...the death of a doctrine of faith that had a huge impact on the course of Western civilization." From the arch-conservative secretary of the Papal States, Giacomo Antonelli (who oversaw daily affairs), to the avatar of Italian independence, Giuseppe Mazzini (a leading dissident fighting against clerical rule and for a united Italy), Kertzer brings to life a cast of characters whose divergent voices arose from a new Europe. A consummate storyteller, Kertzer blends academic rigor with fluid, energetic prose, and the result will satisful specialists while entertaining those who might otherwise expected to be bored stiff by a volume of church history."
—Publishers Weekly (starred review) 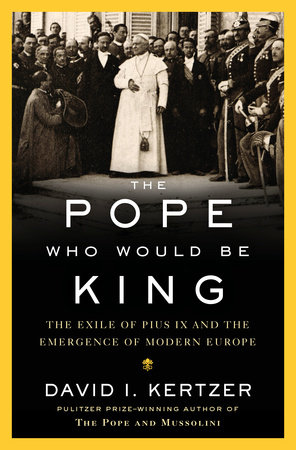