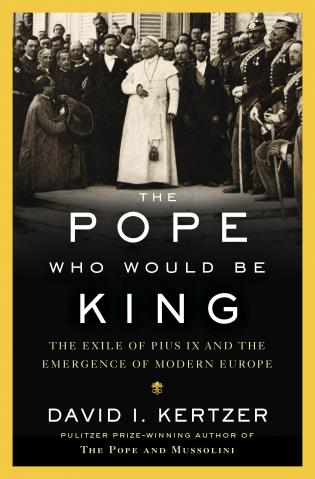 The violence that erupted in Rome in 1848, the hasty flight of a frightened pope into exile, and the proclamation of the end of the Papal States were among the most dramatic and consequential events of the nineteenth century.  Yet today they are practically unknown outside scholarly circles.  The story told in The Pope Who Would Be King is central to understanding Europe’s rocky path to democracy, and the ending of the papacy’s role as a pillar of reaction. It heralded the death knell of rule by divine right in the west and was a crucial step in the struggle to separate church and state.  Modern Europe as we know it could finally emerge.

The story could hardly be more dramatic, its cast of characters more colorful.  A young, new pope, replacing his widely reviled predecessor, is first hailed as a popular hero.  Crowds parade through the streets singing his praises.  But, surrounded by cardinals convinced he is leading the church to ruin, and realizing that he is fast losing control, the pope tries to backtrack.  His outraged subjects turn against him.  His prime minister is assassinated; a menacing crowd aims a cannon at his palace.  Disguised as a simple country priest, he flees.  Taking refuge with the King of Naples, known as the “bomb-king” for his recent bombing of his own rebellious subjects, the pope calls on the Catholic powers of Europe to send their armies to restore him to power.  In Rome, the first popular election in history is held, and a republic is declared.

A story of intrigue, back-stabbing, and relentless duplicity then unfolds.  Louis Napoleon, head of the new French Republic, reaches a secret deal with the Austrian empire to restore the Papal States, while telling the French parliament that he is sending troops to Rome to protect popular rule there from arch-rival Austria.  The pope, assisted by his scheming secretary of state, Antonelli—a cardinal but not a priest—makes a public show of calling for French troops as well as Austrians.  Yet, worried that the French will pressure him to keep his reforms on returning to power, he secretly schemes with the Austrians to get their army to Rome first.

In Rome, the Jews are freed from their fetid ghetto, free speech is proclaimed, and censorship and the Inquisition are ended.  As four foreign armies march on the Eternal City, the prophet of Italian independence, Giuseppe Mazzini, after years in exile in London, takes the reins of Rome’s new government.  The swashbuckling Giuseppe Garibaldi and his scruffy legionnaires arrive to defend the city.  Among the many ironies at the heart of The Pope Who Would Be King is that the French foreign minister who presides over the destruction of the Roman Republic was Alexis de Tocqueville, famed author of Democracy in America.

The last book in English about these dramatic events appeared over a hundred years ago.  Yet, an incredibly rich trove of primary documents allows the story to be told in a fresh way.  These include both documents found in Vatican, Italian, and French archives, as well as a huge amount of published diplomatic correspondence, and scores of first-person accounts.  David Kertzer, who has spent decades in these archives probing the fraught history of the Holy See’s relations with the Italian state, found the story impossible to resist.  As in his Pulitzer-Prize winning The Pope and Mussolini, and his National Book Award finalist, The Kidnapping of Edgardo Mortara, he here takes the reader into the middle of the action, offering a page-turning narrative, and bringing a remarkable cast of characters to life.

The Pope Who Would Be King has been named one of Publisher's Weekly most anticipated books of spring 2018.

Read advance praise for The Pope Who Would Be King.

Read reviews of The Pope Who Would be King